Fundamentals of the “Must Ang’k It™” Structure and Design

The framework of the “must ang’k it” TM image has an audio-visual signature that exemplify the law of causation and effect. Both the Visica Piscis and the Ang’k are depicted in unison because they share the same energy source and operate through the same basic principles.

Also symbolically, they have embodied the source of creation or causation since primordial times. 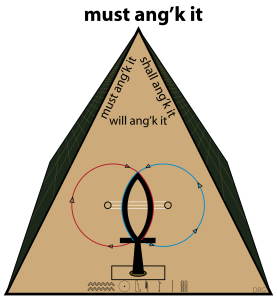 What is the definition of the phrase “must ang’k it”?

Must means an essential requirement.

Ang is a power word. This means it acts as a container or carrier of life-giving forces/energies.

Ang’k is an image that propagates life force through the ether or electromagnetic field between a source and its target.

It means anything from the ether to the physical level. Also (It) in daily usage stands in and covers for everything.

Moreover, the TM image shows three similar Creative Life- giving Force/Energy phrases: “must ang’k it”, “shall ang’k it” and “will ang’k it”.

In essence, at the micro level, these phrases represent an essential requirement by any business leader to keep formulating the right strategies, right actions and right results through Quality Mind Seed-Thoughts.

Lastly, the pyramid as a symbol, signifies striving for perfection and is used in our design to house the key symbols and phrases.

And indeed, these phrases are aptly placed in the attic to convey the wisdom and knowledge that a strategy as a derivative of an idea is a reflection of causation in the mind of the manager.

The MAI TM Design as an entity modelling the CLFE and strategy creation.

Symbolically, at the micro level, the merger of the Ang’k and Visica Piscis, typifies the initial movement of causation or source force. At this stage, the dynamics of this movement entails the fluctuation between rest and motion.

Here, rest equates to source force that is dielectric or etheric and motion equates to magnetism.

The effect, as a derivative of this initial movement, is depicted as the two opposing but complementary spheres that inevitably rise from the source or dielectric plane comprising Electromagnetism (EM).

The white portal as the point of equilibrium that connects the red and blue intersecting spheres is neutral, and its purpose is to store the CLFEs source force or pulsating energy (EMP).

In addition, as part of the “must ang’k it” phrase, the word “ang” with its magnetic influence as a life-giving force simulates an electromagnetic pulse (EMP) that eventually moves as a force that has its vibratory effect too.

Correspondingly, the ang’k symbol represents the propagation of electromagnetic waves (EMW) of light and sound that pulsates between a source and its target.

Comparatively, at the macro level, a CEO’s strategy amounts to causation and is fundamentally a Quality Mind Seed-Thought and by extension his “vibration of will” that similarly operates by way of its magnetic qualities to produce the desired material effect.

In essence, this shows that the Idea of Mind behind a business strategy, which reflects the causation factor simulates the CLFE creative process.

So, in actuality, the function of the CEO’s strategy is to balance by simulating the forces/energies between causation and its effect in order to continually produce favorable returns.

How is the MAI TM system suitable for Business Management Practices as a complementary fit.

1) As exhibited in the TM or at the micro level, the coupling of the primary symbols corresponds to the cyclical act of nature’s giving and re-giving motion, which is the first act of duality. Inevitably, this initial act also is the model for all causation at the source.

The parallelism at the macro level entails a CEO’s strategy being comprised of causation and effect (materialization) of which both elements are the same kinds but dissimilar in degree. In other words, it reflects an indispensable duality; causation gives and effect re-gives.

2) As well, at the microlevel, the duality shown in the TM is also analogous to the electromagnetic field being duly excited by pulsation or source force. As a result, this source force (CLFE) will be simulated as electromagnetic waves (EMW) of sound and light. And science proves that sound and light vibrations create all material structures at the energy and atomic level.

Accordingly, the compatibility at the macro level is that a CEO’s thoughts, ideas, and strategies via simulation do accompany magnetic influence, vibrations and the reverse. In essence, matter is formed by electrically simulating the waves of thought.

3)Moreover, at the micro level in the TM, duality on the physical plane or atomic level is shown as electricity (positive/red sphere) and magnetism (negative/blue sphere).

However, these spheres oppose each other, but inevitably complement each other for the purpose of creating matter within the atomic or physical plane.

The equivalence at the business strategy or macro level is that once causation and materialization are synchronized, the business can continue to successfully achieve its objectives and goals for its stakeholders.

4) Additionally, in the TM image, the observed motion or vibration of the opposing intersecting spheres stems from having a common portal linking them.

This portal, as the point of equilibrium, typifies the source of causation that inevitably causes the continual movement between the polarities of the spheres. And science records this observed movement as a natural phenomenon of nature. Further, this is proof that the laws of duality and vibration are forever in operation.

For correlation purposes, at the business strategy or macro level where a viable strategy becomes the common guiding principle between management and its customers, the process from causation to materialization inherently simulates movement too.

What are the Benefits of the MAI TM’s Integration into any Business?

1)The TM signifies the organic process underpinning the overall purpose of the business. In particular, the TM symbolizes the cause-and-effect framework of forces that the strategy and goals of the business are modeled on for the purpose of benefitting its customers, employees and shareholders.

2)This TM as it mirrors the aspirations of the CEO’s strategy most likely can assist to energize, propagate and actualize ideas from conception to germination to fruition.

The point is, at an energy level, symbols do reflect you and what you stand for in a highly concentrated form. This is a reflection of the law of correspondence at work.

3)This TM as an asset most likely can serve as a catalyst to management to provide a more result-oriented means of staying ahead of its competition.

4) Most likely a marketing strategy that permanently features this TM can be more wholesome in approach for its management practices.

5)This TM most likely can also influence the business’s capacity through its key human resource to further secure and improve its customer relationships through the creation of a better strategy.

6) Whenever a business as part of its strategy identifies with and implements this TM, it means symbolically, the CEO through simulation has knowingly arranged and enacted the activities of the business to coalesce with the CLFE.

7)The CLFE does not operate in isolation of a Quality Seed-Thought that will eventually become a business strategy. But of course, the mindset behind the strategy must have the potential to harmonize with the CLFE to facilitate the desired success of the business.

Devon Royden Gerald a.k.a Rumpy is the founder of this Trademark.